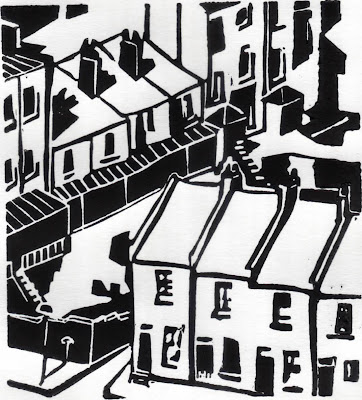 Berlin and Melbourne are flat cities, but Sydney has lots of steep hills. Each day, my mother took my brother and me on a walk up and down the hilly narrow inner-city streets near our house.
We walked to the post office to buy aerogrammes and to post letters back to family and friends far away.
We walked to the little deli that sold ‘continental’ groceries which you couldn’t buy in ‘normal’ grocery stores back then: things such as dark rye bread and olives and gherkins and liverwurst and cheeses that weren’t cheddar.
We also often walked to the little park with the swing. The little park was at the high end of a street and it had a sort of rock cliff that dropped down to the streets below. I wonder if the area down there may have once been a quarry. My mother didn’t like us going close to the edge, but I loved it because from there, the houses down below looked like they were a sort of toyland.
Once my brother rolled a big glass marble over the cliff edge. I hoped that it would bounce all the way down to the miniature-looking houses at the bottom, and knock them all down. But instead the marble just disappeared.
My brother was very sad that he had lost his precious marble. I was sad that I had missed out on seeing the demolition of toyland.