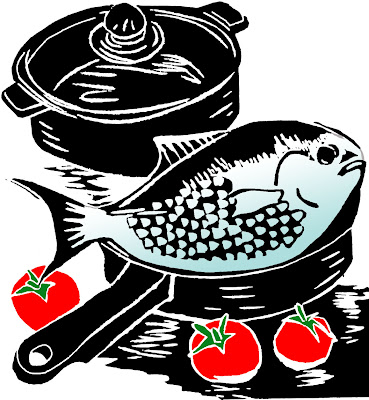 Our next home was closer to the sea again. Although this neighbourhood lacked all the little ‘continental’ shops of the inner city, it more than made up for it with beaches and headlands and bushland. It was a lovely suburb for going for walks and we often went to the beach to make sand castles and to play in the waves.
I think we had very little money during that time, so sometimes when my father came home in the afternoon, he would go rock fishing for our dinner. All four of us went on these afternoon fishing excursions. While my father fished, my mother watched my brother and me as we played with toy boats in rock pools or climbed on rocks.
Some days my father caught a big fish, but mostly they were pretty small.
My parents didn’t want relatives in the old country to know that things were a struggle for us. To reassure the relatives that life in Australia was simply perfect, my mother and father asked me for my dolls’ cooking set. My father had caught three little fish that day. He and my mother artistically arranged one of the fish in the dolls’ frying pan, with a few mini tomatoes alongside to give a sense of scale (they were supposed to look like big tomatoes).
When our relatives received the photo in the next letter, they marvelled that my dad caught fish that were too big to even fit in the frying pan!