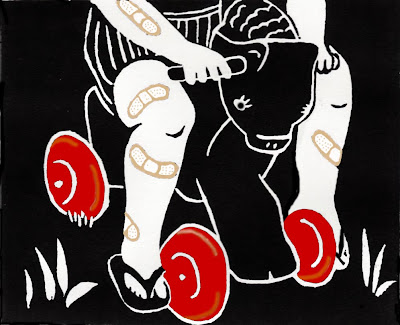 So then my youngest sister was born.
Until she was about three, she had almost no hair at all but then when it did grow, it became a wild mop of curls.
When her curls grew, my baby sister became obsessed with her clothing. She usually had at least three complete changes of clothes during the day. I’m not sure why. When we came home from school, my mother would tell us how many times my sister had changed her outfit that day.
She was also obsessed with bandaids. She loved to plaster them all over herself and could very easily ‘require’ twenty in a day. The weekly shopping list had to include a sufficient supply of bandaids.
I’m not sure whether she outgrew the bandaid obsession, or whether the weekly shopping was just no longer able to accommodate it.