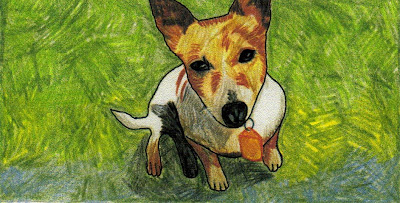 Sometimes you see a dog wandering along on its own. It might be a stray dog, or it might be a dog that has just decided to jump the fence and go on an outing alone while its owner is at work. Until a few years ago, when I saw such a dog, I would have crossed the road to the other side of the street to avoid it: because I was afraid. I had a few bad experiences with aggressive dogs when I was a kid, and those experiences sort of left their mark. I did not understand dogs at all. I thought they just like to sniff and bite people.

But that changed when Dog wandered into my life. You could say Dog has been rescued twice, because his previous owner rescued him, full of good intentions, from a doggie rescue shelter for abandoned or abused dogs. But the previous owner found that he was unable to cope with all that caring for a dog requires.

Given that I was sort of afraid of dogs, it is strange that Dog should have ended up with me. I did not want a dog at all. It is a long story, but suffice to say that he sort of insinuated his way into my life…. and also, Mog really wanted him.

So now Dog, the almost-non-barking, doe-faced, Jack Russell/Mini Fox Terrier/ Australian Red Cattle Dog cross, has been with me for about 3 and a half years, and I have definitely become a dog person.

I love going for long walks with Dog. I chat with other dogs and their owners when we are at the park. I love the way Dog races up to me with his tail wagging like crazy after I have been at work all day. I love the way he does a face like the cat in Shrek when he is begging me to play with him or throw his toy for him.

I even let him sleep on my bed. None of my friends can believe that one!

So now I just have to look out that the python in the garage does not eat him. Because I am very fond of Dog.