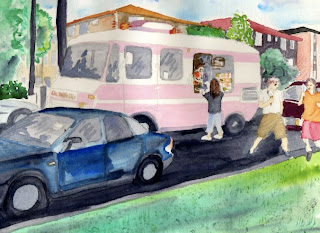 I was out walking with Dog this afternoon, when the icecream truck went by.

It drives near where I live fairly often. With so many apartments, there are always bound to be a few kids wanting to buy an icecream.

The icecream truck used to always play ‘Greensleeves’ but lately, it often plays ‘Lambada’. Did they change the tune to catch the attention of the demographic that pays for the icecreams?

Today, the truck played ‘Greensleeves’ and it reminded me of a man I knew, who was once a little boy. The little boy’s mother often didn’t have enough money for icecream, so she told her little boy that when the truck plays the music, it is the driver’s signal that he has run out of icecream. For years the little boy believed this story.

The man grew up and had two children. He told his children that when the truck plays the music, it is the driver’s signal that the truck has sold out all its icecream. But his children never fell for the story.